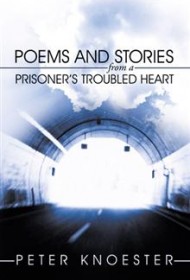 In Poems and Stories from a Prisoner’s Troubled Heart, Peter Knoester reflects on the suffering of prisoners, God, nature, and love. One of the themes linking these subjects is the idea that an individual—despite mistakes, regrets, guilt, and anxieties—must accept his existential fate and move forward through doubts.

In the two-stanza poem “Why,” Knoester asks a universal question: “Why have winter, summer, fall, / What is the purpose of it all?” He then answers it simply: “It’s the reason we feel alive, / The will to live, which is the drive.” This idea that man is part of nature and also a force within himself carries throughout many poems, which makes sense considering the solitary and unproductive nature of imprisonment in the modern American penal system.

Though there’s an inherent fascination with the imprisoned, Knoester never reveals how he came to know so many incarcerated people. The poems lack any identifying details of place, time, and circumstance. This is a major weakness of the book. Readers looking for much sensory information will be disappointed. Cultural, political, or ethnic contexts are also left out. Most poems depend on summaries, as in “What is truth,” which concludes, “Then we get up and make our bed / And then our breakfast we will get / Some times it’s eggs or it is beans / You’re kept alive by any means.”

Knoester occasionally returns to the motif of self-examination, as in “The man in the glass,” which claims that “The fellow whose verdict counts most in you / Is the one staring back from the glass.” This concept may appeal to those who haven’t found lasting satisfaction looking for external approval.

While this collection seems sincere, it doesn’t deliver on its promise of actual “stories” from a troubled heart. Instead, it expresses mostly generalizations and abstractions that ultimately hinder its ability to connect with readers on a powerful level.