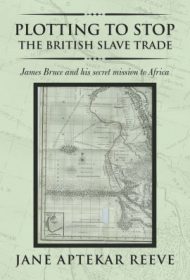 In Plotting to Stop the British Slave Trade, Jane Aptekar Reeve offers an extensive account of James Bruce and his role in the British abolition movement.

Bruce (1730-1794), was a Scotsman and inveterate traveler. He published his extensive Travels, which focused on his arrival at the source of the Nile at Gish Abay, a village in Ethiopia. Bruce falsely claimed “discovery” of the source; however, this is not Reeve’s focus. Rather, she asserts that his travels coincided with his clandestine activities aimed at ending the slave trade, an original thesis stemming from her scholarship.

Reeve excels at emphasizing aspects of Bruce’s work overlooked in recent historians’ accounts. She examines many of Bruce’s illustrations, which reveal his interest in geography and cartography and the economies of the slave trade itself. These materials advance her argument regarding Bruce’s role as a clandestine abolitionist.

Her biography is an extensively researched work, in which colorful characters such as James Boswell and Samuel Pepys play intriguing roles in Bruce’s adventures. She employs multiple primary sources to prove her thesis.

Her argument, however, partially relies on suppositions drawn from source material that doesn’t explicitly support it. For example, Reeve’s claim that “Bruce was a secret agent traveling to further the British project to end the slave trade,” appears to be inferred from, rather than proved by, the documentation she offers in support of it.

Additionally, the book’s narrative structure is convoluted. For instance, an early chapter analyzes Bruce’s illustrations before fully explaining their relevance. Further, the work covers such a variety of material, ranging from local Ethiopian battles to the apocryphal Book of Enoch to English political machinations, that readers may become disoriented.

The work also suffers from typographical errors. And while some quotations are properly cited, some are not cited at all.

Reeve’s biography is an ambitious undertaking. Her work, however, requires further proofing and a strong editorial hand before it will prove accessible to a wide audience.