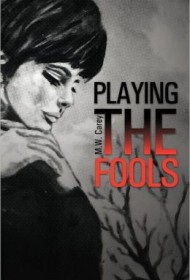 Thrillers should keep you guessing, and Playing the Fools certainly does that. In fact, it’s wise to keep score from the very first page, as M.W. Carey jumps right into a high stakes cat-and-mouse game that makes it very hard to tell who to trust, if anyone.

The trouble is: it is really hard to tell. The complex maze of double-crosses that Carey unfolds here should be the story’s strength, but is also its main weakness.

The hall of mirrors effect starts with a money laundering deal that has clearly gone wrong, but for whom? Is it Dan Burdette, the man who has smuggled millions of dollars into Panama? Or is it his employer, Myron Stracht? And what does it all have to do with Dan’s femme fatale wife, Barbara? Intriguing questions, but it’s difficult to become engaged in the story, as we know little about anyone’s backstory. Carey keeps his characters at arm’s length, rarely delving into their deeper motives.

Instead, the author (who notes on the back cover that he “lived the events portrayed in this novel”) relies on standard thriller elements: underworld bosses make deals over cigars and cognac in secret meeting places; beautiful women cause sex-obsessed men to make unforgiveable mistakes; and the money always remains just out of reach. Graphic, clandestine sex and violence fill out the form as the blame shifts from one character to another and back again.

Carey’s writing style is spare, which creates a palpable sense of film noir, but also leaves out a lot of detail that could help readers follow the constantly shifting alliances among his characters. Unusual formatting choices—underlining for French phrases, for instance—and the occasional typographical error also create distraction from the action at hand.

Playing the Fools contains many elements of an engaging thriller, but doesn’t quite pull them all together into a satisfying read.