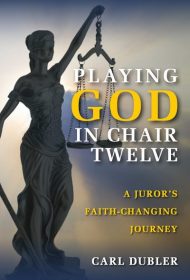 Many adults have served on a jury. Few, however, have been charged with the grave task, as Carl Dubler was, of deciding if a man should live or die—a challenging experience he details in his memoir, Playing God in Chair Twelve.

Dubler, raised in Northern Colorado, attended a fundamentalist evangelical Christian church. His world view was rigid: You were a conservative Christian, or you were a sinner. But in 2009, as the trial began, Dubler’s marriage was failing; he felt abandoned by God and adrift without spiritual guidance.

The high-profile Colorado trial, for which Dubler was elected jury foreman, concerned the case of Robert Ray, a man accused of conspiracy in the first-degree murder of a witness who was about to testify against him in another murder trial. The trial lasted ten weeks, and the stress took a visible toll on jurors. Tension was palpable: Jurors argued, cried, alternately shouted and became distant. Dubler experienced a profound loneliness; always a quiet man, he succumbed to visceral screaming on occasion as he drove home from court. Although he hadn’t prayed in years, Dubler asked God to not let him fail. Ultimately, Dubler led the torn jury to a unanimous decision and came to realize that his only job was to “love my neighbor” and that God, not man, should judge.

Dubler’s telling of the trial is fast-paced and raw with emotion. He writes in an earnest, vulnerable tone, describing his deficits and disappointments, including his unhappy marriage. His skillful use of flashbacks allows readers to understand his various reactions. Unfortunately, he fails to extend the story beyond his own experience. More information on Colorado’s death penalty, gang activity, etc., would provide context and flesh out the narrative. As is, it feels more like a personal journal than a book for readers at large.

Nonetheless, those interested in this much-publicized trial or the death penalty in general may appreciate this intimate look behind the jury room door.