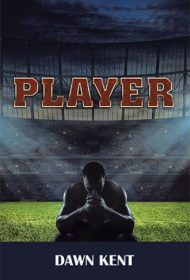 Dawn Kent’s Player is a turbulent romance between an aspiring singer and single mother and a handsome player in the Australian Football League.

Natalie and Danny first cross paths at a popular nightclub where Nat lands a coveted spot as a regular singer. Danny, “the hottest player in the AFL [Australian Football League],” is used to female attention, but is drawn to Nat, despite her threatening ex, Troy. When Danny instantly connects with Natalie’s young daughter Nicole, it seems like the perfect romance. But insecurities, misunderstandings, and Danny’s adoring female fans cause problems that may be too much for them to overcome.

In many ways, Natalie and Danny are attractive characters. Natalie has lost the father of her little girl in a car accident, but is a hard-working masseuse, a talented musician and a caring mother. Danny is committed to his team, and has an open, generous personality, although he’s always avoided long-term commitment. Readers will root for the relationship as Kent throws problems aplenty in the path of true love – from fake pregnancy claims and unexpected health emergencies, to each one’s battle with their own fears and insecurities.

Kent struggles, however, to juggle the points of view of her two main characters, head-hopping between their thoughts from paragraph to paragraph, even when they are not in the same physical location. Certain storylines – Natalie’s singing career, the stalking behavior of her ex-boyfriend – fizzle out in preference to Danny’s attempts to build a relationship with someone new, even as he still feels love for Natalie. The similarity in names of Natalie/Nat and Nicole/Nicky causes unnecessary confusion, and awkward shifts between present and past tense are a further distraction.

Finally, certain incidents are not believable, particularly hospital scenes where accurate knowledge of conditions and procedures is lacking (for example, friends can’t just walk into the room when emergency C-sections are underway).

Despite these flaws, the plot is entertaining and the story may hold appeal for romance fans.