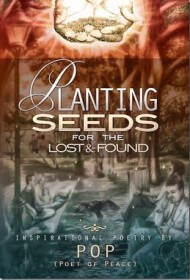 Lawrence “POP” Rutherford presents a series of Christian-inspired poems accompanied by eye-catching color illustrations in Planting Seeds for the Lost and Found. The author’s Introduction notes that his poetry “is simple” and meant to be inspirational, targeted at those “who do not read conventional self-help literature.”

The book’s first half contains reassuring poems, each displayed as part of a two-page spread with an accompanying illustration. With each poem, POP (“Poet of Peace”) references a Bible chapter and verse. For example, “Kill ‘em With Kindness” features an illustration of a young black girl offering a flower to a hooded member of the Ku Klux Klan. It’s a beautiful image, and it’s linked to a quote from Matthew 5: 44-48 (“Love your enemies,” etc.)

The biblical references tie into the book’s second half, where the original art is repeated (without the poem), with the full text of the previously cited Bible quotation displayed below it.

Planting Seeds for the Lost and Found makes an appealing package; well-designed and colorful, the visuals by an array of artists are consistent and often stunning. The book’s weak point is the poetry itself. Written in a “street-poetry” style, the poems rely on rhyme that often seems forced, as in: “Christ died on the cross/Becoming our eternal boss” or “Persevere and hold on because the change will come/Soon and very soon you’ll be with God and His divine Son.” The text contains mistakes in word usage (“rein” instead of “reign”; “use to this” instead of “used to this”) and a lack of punctuation (particularly periods to mark the end of sentences).

With the amount of attention clearly paid to the visual aspects of the book, the poems come up a bit short in comparison. Still, they seem to accomplish the author’s goal. Religious readers should discover much of interest in Planting Seeds for the Lost and Found and may even find themselves returning to it often for uplift and inspiration.