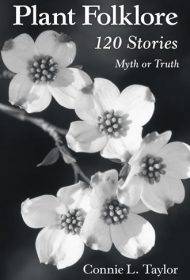 Connie L. Taylor’s book is the distillation of a lifetime of knowledge about the native and naturalized plants of Appalachia.

The plants in Plant Folklore, which is primarily a reference book, are divided into three sections: “Spring Wildflowers,” “Summer Wildflowers” and “Plants.” They are listed alphabetically by their most recognizable common name. The one- to two-page histories of the plants’ medicinal and culinary uses in early Native American and colonial/frontier American cultures have been compiled from a number of sources listed in the Works Cited section.

While readers will find some useful information here, the book suffers from several flaws. Perhaps the biggest disappointment is the photos. While sharp, crisp images could be useful in identification, these black-and-white photos are often out of focus. The photos are usually close-ups of the flowers, and foliage is either not featured or difficult to see against dark backgrounds, making field identification difficult.

While the first two sections are clearly labeled, the third section, “Plants,” is a catchall, including herbs, vines, shrubs, trees, food plants and the parasitic mistletoe. Also included are short essays on poisonous plants, poisonous plants with edible parts and other uses of plants, all of which would be better condensed and placed in the introduction. The information on cannabis is a puzzling addition to a book about the plant lore of a region (although cannabis has been naturalized in out-of-the-way places everywhere).

Another problem is repetition. In the single page on liverworts, for example, Taylor writes twice that their common name came from the leaves’ resemblance to human livers. Also, his choice of the most recognizable common name might not be yours, so finding a specific plant on the contents page might be difficult. Cross-referencing would help.

Despite its shortcomings, plant lovers of the Appalachian region who are already familiar with many of these species might find it worth a look.