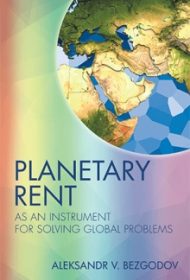 With Planetary Rent, Aleksandr V. Bezgodov makes the case for creation of a worldwide organization with a mandate to pull the planet back from environmental and geopolitical disaster. This organization would not supersede national governments but work as an overarching structure to protect and restore the Earth’s beleaguered resources and to intervene in political crises caused by disputes over resources and the unequal distribution of wealth.

The organization would be funded by what Bezgodov terms “planetary rent” paid by a number of sources, including “collective and individual enterprises, private companies, entrepreneurs and any individuals who receive incomes.” One such payment, for example, would be for the use or pollution of a natural resource, to be “determined by the limitedness of a resource.”

Bezgodov distinguishes between resources owned by individuals and states and those that don’t fall under traditional categories of ownership.  For example, “factors of production” involving “near-Earth and outer space, the energy of winds, oceans, and atmospheric air” should be “included in the list of resources that bring rent.”

He discusses the alarming breakdown of numerous environmental and geopolitical elements (for instance, the ongoing irrevocable destruction of oxygen through oxidation and the 1990 Iraq-Kuwait war over oil fields that led to United Nations military intervention) to show the need for immediate action.

As background for his proposals, he discusses various economic theories. His specialized language in these passages might put off lay readers.  Phrasing such as “the accessibility of infrastructure services, infrastructure pricing policies and infrastructure costs determine the necessity to form rent revenues based on infrastructure as a production factor” is hard to understand, even in context. Bezgodov’s book also lacks an index, which would make his work more accessible.

Despite the sometimes arcane language and lack of an index, Planetary Rent represents a thoughtful approach to compelling issues and with editing could appeal to readers interested in resource management.