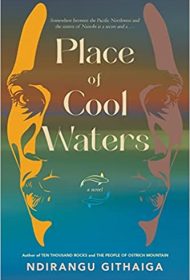 In Ndirangu Githaiga’s novel, Place of Cool Waters, a young man on a trip is imperiled, but also learns surprising information about his past.

Jude Wilson was adopted as a baby and raised in a small town in Washington state. His adoptive father was a Boy Scout troop leader, and they spent many happy weekends camping.

Much later, a chance meeting with an old friend causes Jude to make a bold decision. Despite never having been on an airplane before, he resolves to travel to Kenya and visit the graves of his boyhood heroes, Captain Tom Wilson, founding scoutmaster of the Nairobi Boy Scout troop, and Lord Robert Baden-Powell, who created the Boy Scout movement.

Checking in at a YMCA youth hostel in Nairobi, Jude encounters the young manager, Qadir Mohamed, an orphan, like Jude. The two become friendly, and all goes well until Jude unwittingly boards a haramu, a vehicle masquerading as a taxi. Haramu drivers are notorious for robbing unwary passengers. Jude is drugged and abandoned in the wilderness, stripped of his wallet, passport, shoes and socks. He nearly dies before being rescued—only to later be jailed on suspicion of being a terrorist.

This is a tale of love, loss, grief, the power of family, and the joy of discovery. The author, who was born in Kenya and emigrated to America, brings Nairobi’s vibrant streets alive. Qadir and Jude are likable characters, both struggling to find their place in a world that isn’t always welcoming.

Unfortunately, the narrative is slowed by often-stilted dialogue and unnecessary details involving tangential characters. For example, five pages are devoted to a friend of Jude’s adoptive mother fretting about her meatloaf recipe. Thankfully, the action takes off in Part 2, and the story becomes compelling, with a big reveal at the end.

While the narrative is uneven overall, those willing to persevere through the sluggish parts will find rewards as the story unfolds.