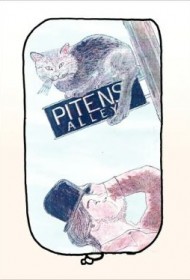 Pitens Alley is a strange odyssey, a somewhat oracular, whimsical expedition into prose poetry (or lyrical prose) reminiscent of work by Lewis Carroll and Gertrude Stein, as well as Carl Sandburg’s Rootabaga Stories. It is rife with anaphora, puns and witticisms predicated on folklore and fancy.

The narrative revolves around a series of dialogues between creatures: a man (Mr. Hommes) and a cat (Pitens); an elephant and an owl; an owl and a rooster; a lion and the same elephant, and so on. The rooster feels slighted because the owl ignores his crowing; the lion and elephant try to work out appropriate protocol (which one outranks the other); the owl and elephant trade jibes: “Eventually the owl cracked back, ‘Maybe if I had your snout, I’d be snooty enough to wise up.’”

There’s a curiously labyrinthine feel to author Brian Luckett’s text that doesn’t necessarily serve it well. The banter has a tendency to wind in on itself, and the repetition, rather than deepening and enriching the content, begins to feel arbitrary or formulaic. There’s nothing wrong with cleverness or glib observations, as long as they’re supported by palpable narrative, but Pitens Alley basks too long in the pleasure of its verbal hi-jinks. After awhile, the juggling and loopy semantics can be wearing, because they seem to exist for their own sake, rather than to serve a larger theme.

In his “About the Author” page, Luckett reveals that Pitens Alley began as a short story for a high school English class. This may explain why the book seems to lack the judicious trimming that can shape a narrative, helping the finer passages to emerge. There’s a strong literary tradition for the wisdom that can be found in enigmatic conundrums, playfulness, intuitive connections and seeming chaos, but Luckett barely taps that potential. He’s on to something, but needs to refine his idea into a work of more coherency and resonance.