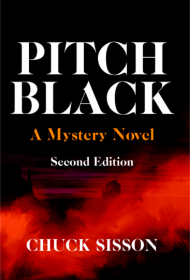 Pitch Black hooks readers with a catchy start: Stan Miles mysteriously wakes to find himself in a space that is, as the title promises, pitch black. What follows is a police procedural with Native American culture at its center.

As the story begins, Stan feels his way around the large room, eventually finding boxes of cookies he eats. Meanwhile, Miles’ brother Larry, a college student in New England, has always been close to Stan and is worried that his brother seems to have disappeared. He begins looking into Stan’s work for a New York City Native American museum for clues.

When he learns that Stan had gone to Arizona to load Indian artifacts on a plane headed for a museum facility in Virginia, he travels there. Soon, Larry befriends Native American sheriff BJ Cornsilk, and as he comes to appreciate American Indian culture, the story often returns to Stan, who eventually learns he’s trapped in a long-abandoned warehouse and struggles to survive.

Readers will find Stan’s part of the tale unsatisfying. First, it’s hard to tell how long Stan has been trapped before his brother begins searching for him. And although Stan eventually finds water and some sort of canned meat, his story ceases to be mysterious or ultimately, very compelling, due to dry descriptions of his situation that become tedious.

The police procedural that makes up the bulk of the plot is typical— drug smuggling, nighttime landing strips, etc. — and unfolds without many wrinkles or twists. The author also writes in a straightforward style that lacks spark, such as: “He found the cheapest rental car that could do the job…and immediately headed west on Highway 264 through Window Rock and on to Granado, where he headed due North on State Highway 191 into Chinle.”

Overall, the mysterious pitch-black plight of Stan Miles resolves itself in an unexciting way. Even readers who are intrigued at the story’s start may lose interest by the finish.