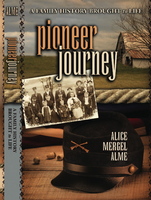 Clearly a labor of love and family pride, Alme’s novel about her great-grandparents, immigrants who settled in Minnesota during the mid-1800s, captures many of the historical events and the social culture of the times.

Courageous and accustomed to hard work, both the German Mergels, her paternal ancestors, and the English-Irish Baileys, her maternal side, endured unremitting hardships, including illness and sudden death, droughts and blizzards, failed crops and businesses, and, in the early days, threats of violence from Native American tribes. Alme’s research into the state’s participation in the Civil War adds another dimension to the narrative. Her great-grandfather Henry Mergel, who saw action during both the Dakota Uprising and the War Between the States, was later afflicted with “Soldier’s Heart,” characterized by “outbursts of violence and horrible nightmares,” clearly the same condition we now call Post-Traumatic Stress Syndrome. Most significantly, Henry lost his faith in God, a crucial affliction in the deeply pious Christian milieu in which all of the characters existed. Marriage to deeply religious Georgia Bailey restored his faith and happiness. The novel’s first two-thirds, which describe both ancestors’ childhoods and youths, culminates in an overwritten finale detailing that marriage and the births of their offspring.

Alme’s narrative is earnest, plainspoken and devoid of stylistic grace. The factual events she describes are nicely detailed, but unfortunately the imagined scenes of daily activities, interspersed with wooden dialogue, are trite and further hampered by grammatical inelegancies.

While those interested in Minnesota history might enjoy this story, it would seem more suitable for young adult readers, who would find it informative and perhaps even inspirational and would better tolerate the jejune dialogue, which is likely to impede more sophisticated readers.