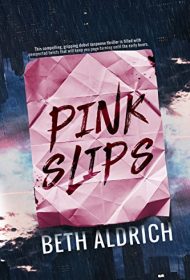 Mugged in Chicago while pregnant, Betsy finds contentment after moving to a lovely northern suburb. Ten years later, she is raising two kids and pregnant again at age 38, when she suddenly begins receiving threatening notes on pink pieces of paper while her husband is away on business. “I watch you. Almost touch you,” the first one says.

As the notes escalate, Betsy calls in the police, who do nothing, having little evidence to go on. Betsy decides to begin her own sleuthing with the aid of her father, a willing woman neighbor and even her perceptive dog to try to unearth the culprit and determine why he is harassing her.

Emerson’s book delivers a solidly structured and detail-filled plot that starts with a skillful, early buildup of suspense.  Like an Agatha Christie novel, the novel makes efficient use of misdirection while adding several suspicious suspects to the mix.

The characters are vividly drawn and believable, particularly Betsy, who authentically juggles the day-to-day minutiae of child-rearing and meal-planning while looking for clues. In addition, the story features an appealing and creative narrative voice (for example, “The forceful blow comes out of nowhere as he grabs me from behind, the same way a great white shark barrels into an unsuspecting seal floating on the surface of the ocean”).

Pink Slips doesn’t deliver edge-of-your-seat action, but it offers many other rewards. Readers will find it a satisfying beach read, sure to be a crowd-pleaser for women who are fans of the genre.