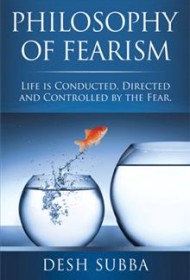 In his Philosophy of Fearism, Desh Subba examines the role of fear in our lives and society.

In this analysis, he covers both the positive and negative aspects of fear.  On the positive side, he shows how fear motivates people to produce scientific and cultural advancements.  For instance, a scientist may be driven to formulate a vaccine because he fears the consequences of a fatal disease. On the negative side, he demonstrates how fears and phobias may overwhelm—a student may give up his studies or “become addicted to drugs” because he is afraid of taking an exam.

Throughout his treatise, Subba scrutinizes fear through myriad lenses, ranging from the historical and anthropological, to the scientific and philosophical.  In some of these contexts, he considers the physiological causes of fear and their relationship to consciousness.  In others, he discourses on fear in relation to Marxism, linguistics, and the more Eastern, mystical points of view.

His book covers extensive ground—so extensive, that it sometimes devolves into mere listings of aspects or qualities, rather than engaging in cogent, philosophical arguments.

Subba’s work also suffers from the use of imprecise language so that the reader is hard put to discover the drift of some of his passages.  “Consciousness should collide with some other objects to produce knowledge;” he says in one instance, “otherwise, neither knowledge nor experience exists.”  Sentences such as this leave the reader scrambling for meaning.  How can an immaterial consciousness collide with a material object?  Subba’s use of tautologies also does little to advance his argument.  “Even the world is beautiful due to its beauty,” he tells the reader in his first paragraph.

Consequently, although Subba’s Philosophy of Fearism is ambitious and could be a comprehensive assessment of fear in all of its ramifications, the book would need some rewriting before it could fully realize the potential of its scope.