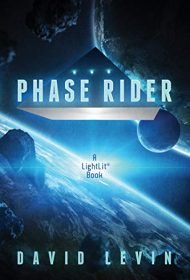 What would you do if you were one of the few that knew Earth and its inhabitants faced imminent destruction? Would you alert humankind or work feverishly in secret, searching for heroes in an attempt to save humanity? In his science fiction thriller Phase Rider, David Levin explores this and other weighty ethical dilemmas.

In a not-too-distant future when plasma shields and antimatter engines have made long-distance space exploration possible and Earth’s inhabitants are beginning to colonize Mars, NASA scientists monitoring feeds from telescopes on Pluto identify a space anomaly heading toward Earth. A “phase transition” is distorting the fabric of space-time, “collapsing some matter while pulling and stretching other matter, much the same as a tidal wave draws coastal water to it before smashing into land.”.

While knowledge of impending disaster is kept from the masses, Ethiopian mathematician Doctor Ayana theorizes that creating a new form of matter and shooting it at the phase transition’s leading edge might extinguish the threat. The U.S. possesses secret technology able to create the new matter and spacecraft for the mission, but delivering it would be  suicidal because of radiation the anomaly generates. When no one with the skills to pilot such a mission volunteers, all hope is lost—until Ayana stumbles across an unlikely hero.

With nuance and compassion, Levin examines his fictional universe, confronting issues topical today, including genetic engineering, the rights and value of those born with disability, and the coexistence of religion and science. Ultimately, though, it’s the heartwarming spirit and altruism of this tale’s unlikely hero that readers will find most memorable.