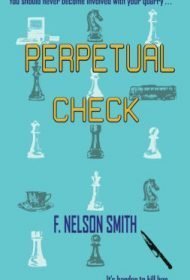 Espionage, murder and the hunt for international trade secrets are the driving forces in F. Nelson Smith’s Perpetual Check.

When Dani Morden accepts her Aunt Lucy’s invitation to tour England, she anticipates a relaxing vacation visiting cathedrals, museums and the English countryside. Instead, the pair is thrust into danger when a woman met in a chance encounter later shows up near death at their hotel room door. In her final moments, she gives Lucy half a postcard imploring her to find a man in Oxford with the other half.

Reminiscent of Agatha Christie’s Murder on the Orient Express, the author places the pair on a tour bus with a group of fellow travelers representing a range of nationalities and stations in life—each of whom stirs the protagonists’ suspicions. The focus remains on Dani and Lucy as they realize their lives are in danger and view their traveling companions with wariness.

The two believe it’s the postcard putting them at risk, but other factors are also at play. They don’t realize that someone is trying to protect them—until one passenger suggests to Lucy that he’s an ally, while another says the same to Dani. As the novel progresses, it’s clear that making the wrong choice will lead to death. Dani, an unhappy, young professional, wants to be right, and her stubbornness puts their lives in greater peril.

As the story evolves, it delivers a palpable sense of suspense. Well-wrought characterizations, particularly of Dani and Lucy and their decidedly different personalities, also keep readers engaged. Smith’s vivid descriptions of the English countryside only add to the fun: “The coach straggled through villages, their stone walls dressed with old-fashioned flowers—foxgloves and harebells. Rounding the road, the bus suddenly emerged into the open, displaying fields bordered with yellow gorse.”

Perpetual Check is a page-turner with a resolution readers won’t see coming. It will please anyone who appreciates interesting characters and mysteries that deliver the unexpected.