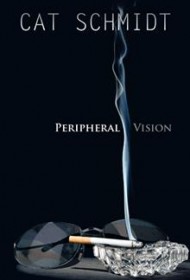 Cat Schmidt has strong opinions about the local and national rules we live by. Her book’s goal, she says, is “to suggest ways to make our lives a little better in this great country,” simplifying life so we can better enjoy it. A mother of four who lives near Houston, she admits a lot of things “really bug me,” and in this book, she shares what she would do to change what bothers and disgusts her most.

For example, Schmidt wants to free up road congestion by eliminating questionable drivers over age 65 and teens under age 18. She would pool all property tax money and divide it equally among every school. She also favors a national driver’s license to make it easier to move between states. Schmidt’s other ideas concern tax and health insurance reform, easier job applications, giving prisoners the option of going into the military instead of jail and more.

Peripheral Vision is an edgy book with the feel of a blog, and is amusing in its own way. At times, though, its language is crude. Regarding global warming, she says, for example, “By the time the government gets off its big fat ass and does something, it will be too late.” And while some of Schmidt’s ideas are intriguing, others seem a stretch (such as requiring all people over age 65 to get a health exam and doctor’s approval in order to acquire a driver’s permit lasting one to two years).

Though generally well written, the text exhibits spelling issues, such as “queues” instead of “cues” and “isle” for “aisle.” In addition, the author’s ideas fall off at the end and Schmidt drifts into personal stories about aging, her purse and her husband’s obsessive tendencies: is it OTC or CDS?, she wonders. (Apparently, she is referring to OCD, but couldn’t she have looked it up to get the acronym right?) In sum, Schmidt can be entertaining and sometimes give pause for thought, but too often she simply goes on a rant.