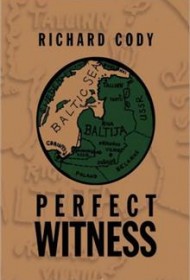 His first thriller transposed the story of real historical figure Marshal Josip Broz Tito of Yugoslavia, a revolutionary who became a benevolent dictator, with his own fictionalized Baltijia, or the Baltic Peoples Republic. In that story, British student Michael Brenan witnessed the kidnapping of Marshal Jurgis Tievas, the president of the BPP, who was assassinated and secretly replaced by a doppelganger, Professor Jurgis Didelis.” In the sequel, Didelis continues to pose as Marshal Jurgis Tievas with covert support from British spooks, who are manipulating the country’s warring factions on orders from Churchill himself. Here, Brenan and paramour Valija Didelyte, the professor’s niece, work together to keep her uncle’s dangerous secret.

Whereas its predecessor was written from the point of view of fictional author John Offord, the sequel is cobbled together from letters, fragments of secret documents and other epistolary sources, not to mention endless obscure literary references. Michael’s diary is just one example: “Till now my life has simply been far too sensible… Am not Robinson Crusoe on some desert island. No Uncle Edourd among Lex Faux Monnayeaurs…”

The drama of a spy novel lies in the keeping of secrets, but Perfect Witness seems more concerned with the dressings of espionage than the inherent tension of the game. The book’s list of dramatis personae includes no less than 31 characters, and they rarely come off as threatened–or even threatening. Jarring shifts in narrative mode, segments of untranslated Lithuanian and dull passages about Cold War machinations do little to help the cause. Cody may nimbly name-check legendary spy novelists like Eric Ambler and Charles McCarry in his preface, but Perfect Witness is impenetrable enough to make a dense puzzle like le CarrÃ©’s Tinker Tailor Soldier Spy look straightforward by comparison.