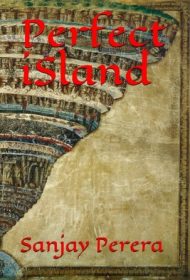 Recently, Sanjay Perera introduced his The Dark and the Light series with Golem & Traum, a dystopian vision where clones, non-clones and robots are at odds with each other. Perfect iSland is the second entry, also centered on dystopian events.

The story’s protagonists are Ben, a copywriter, and Toni, a bank officer, both living comfortably in Singapore when they get wrapped up in a scheme between government officials and an otherworldly demonic entity called “The Gewgaw Man.” The scheme’s end game is dubbed “Plan Charlie” with the intention of manipulating the country’s democracy to permanently retain power. The officials get help from the firm of Golem & Traum and “The Dark One,” leading to an apocalyptic event called “The Rising,” when corporate tycoons work to help the conservative party seize control. The plan also utilizes a new type of zombie called “smobies,” because an infectious smartphone app does the deed.

There are triggers here: Governing party officials call detractors “liberal snowflakes,” and there are “fake news laws.” Wealth inequality is also a prominent theme as the story details a class war, albeit one with demons interfering. Throughout, the author hits many pop culture touchstones, including passing references to Quentin Tarantino, Sherlock Holmes, and Star Trek. Readers will also find parallels to modern phenomena, such as a Twitter-like social media that delivers malicious messages on “uphones.”

The narrative is relatively straightforward, but the book’s phantasmagoric tenor and grotesque imagery can be off-putting. And while the story is undeniably imaginative, the narrative frequently switches between first and third person, which is jarring to the story’s pace. Additionally, the main characters are mostly caricatures: the evil bureaucrat abusing his power; corporate moguls using their wealth to cause others pain; star-crossed lovers, etc. Finally, the premise of a smartphone-based zombie plague has been delivered more successfully in Stephen King’s The Cell.

Admirably, Perera addresses modern social ills, but his approach limits its appeal to die-hard fans of dark fantasy, rather than a larger readership.