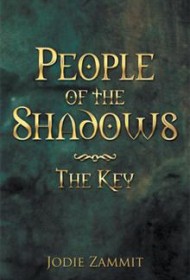 Set on a coastal mountain in Australia, this imaginative fantasy takes readers deep inside the Earth to experience a boy’s adventure with the Shadow People, magical beings who blend with natural elements, such as water, trees, and rocks.

The action starts the night before Sam’s 17th birthday. His parents’ home is invaded, and his mother and father are taken prisoners. Prone to narcoleptic fits (or so he’s told), Sam hallucinates, then faints. The next morning, he overhears a strange woman talking on the telephone in his house and garners information about his parents’ whereabouts. He escapes into the bush and meets his cousin to plan a rescue.

Sam faints again and awakens to see a humanoid creature emerge from a tree in a land with no sun. As they talk, he remembers having been here before and soon realizes that the old Shadow man is his grandfather, Ezekiel, and that he’s deep inside the Earth’s solid core.

Sam wants explanations about what has happened, but Ezekiel warns the boy that he must remember everything on his own; otherwise the Society of the Morrow’s plan to destroy the Shadow People may succeed. The final important memory, involving the titular “key,” will unveil the biggest secret of all.

The story skillfully captures sensory experiences: for instance, “Bioluminescent bacteria clung thickly to every trunk, branch, leaf and treetop. Its blue glow lit up everything with the brilliance of a billion glow sticks.” The writing is crisp and well edited and the plot appealing for young adult readers.

On the down side, a brief Epilogue and Prologue add little to the story, and the novel lacks emotional resonance. Additionally, the slow tease of background information, as Sam struggles to remember his past, feels manipulative rather than intrinsic to the plot.

Despite such drawbacks, the mysterious elemental creatures and budding romance between Sam and a Shadow girl should entertain young adults, who will find an often-intriguing story in these pages.