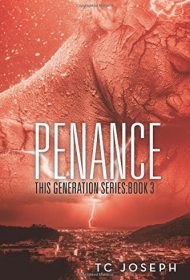 What if Jewish, Islamic, and Christian prophecy—as well as New Age theories concerning alien contact and post-humanity—were all correct? Equal parts science fiction, Christian eschatology, and apocalyptic thriller, the third installment in Joseph’s provocative This Generation saga (after 2015’s Pentecost and 2014’s Precipice), is a grand-scale work of speculative fiction that explores the myths and prophecies of all of the above.

Following the descendants of three Christian women, the storyline of this installment begins as the long-prophesized Rapture finally occurs, instantaneously delivering countless believers into heaven where they can spend eternity with God. The people left on the planet begin a tribulation period where God finalizes His judgment on all unbelievers. Meanwhile, characters are also attempting to survive the Dark Awakening, an event that happened almost simultaneously with the Rapture where millions of unsuspecting people instantly transformed into psychotic killers.

As those left alive struggle to achieve some kind of redemption, others work to save the planet from a looming global disaster while ushering in a new, transcendent form of humanity. But the leaders behind the radical changes may not have the best interests of humankind in mind…

Featuring a unique and unconventional ensemble cast of both faith-driven and morally-bankrupt characters (including a newly elected pope who could be a false prophet and a world leader who is a human/alien hybrid), this page-turner of a read features fully realized characters; an intricate, tension-filled storyline replete with political and religious intrigue; and more than a few bombshell plot twists. The only criticism is that the storyline is so complex—and so tied to the multiple generations of characters—that picking up this novel without first reading Precipice and Pentecost would be pointless.

But that’s a quibble. Fans of Biblical myth-powered novels like Tim LaHaye’s Left Behind series and Tom Perrotta’s The Leftovers will find this thought-provoking series absolutely riveting. In a word: rapturous.