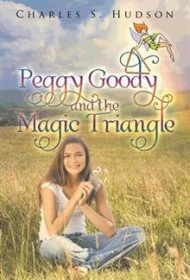 This middle-grade fantasy novel explores what happens after 12-year-old Peggy Goody rescues an injured fairy in the forest and is given magical powers.

Peggy first uses this new ability to grow and shrink at will in order to rescue a child from a burning building, earning her the respect and gratitude of her neighbors, along with the nickname “Leggy Peggy.” She proves worthy of receiving two additional gifts from the fairies: great strength and “hazing,” which is the magical ability to become invisible by blending into the background.

Peggy continues to save people around town, and in gratitude, the villagers often give her mother things she needs in order to work as the town laundress, bringing Peggy and her widowed mother out of poverty. Each rescue interferes with the plans of two evil magical creatures, who plot to kill her. Eventually, Peggy is brought in to help the fairies retrieve a wizard’s stolen magic wand, and in doing so discovers an evil army being mobilized, signaling a sequel.

The setting and Peggy’s magical attributes give this old-fashioned story a folklore quality, but the weapons and military strategies of the fairies and their foes seem more contemporary and sophisticated, and therefore at odds with the story’s world. Peggy’s escapades become repetitive, as in each chapter she saves another villager and angers her foes again.

Author Charles S. Hudson introduces some clever magical concepts, and his narrative picks up once Peggy and the fairies join forces and work with a wizard. But the episodic and simplistic nature of the story and Peggy’s one-dimensional, flawless personality—“Goody” is the right surname for this plucky, always good-natured, never misbehaving girl—ultimately fail to hold a reader’s attention throughout the length of the tale.