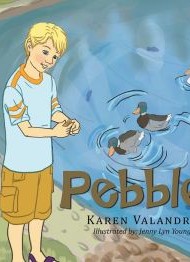 A pebble helps a young boy through the trials of his childhood in Karen Valandra’s picture book Pebble.

The self-aware pebble of the book’s title is discovered by a boy named Travis, who begins to carry Pebble everywhere—school, home, at play—and gains confidence from grasping Pebble in his hand. In this way, Pebble helps Travis answer questions in class and confront a bully (who later becomes a good friend). After a scare in which Pebble goes missing, Travis trespasses on private property one night, resulting in a trip to the police station. Pebble is steadfast in his support: “Well, I was going to be right there for Travis. Just like always. We’d manage whatever the consequences were.”

Travis learns a lesson from the experience, and there’s a nice lesson for Pebble, too. When one of Travis’s teachers describes the process that created Pebble, Pebble — who feels himself superior to “gravel” — realizes that he was once “just a large piece of gravel,” too. The teacher explains: “We all start out with rough edges, sharp and pointy and needing to be smoothed out. [..] if all goes well, we turn out to be pretty smooth and likable and become a well rounded person.”

The morals are gently offered, and the story leads to them organically. The book is written from Pebble’s perspective, in a style that is more conversational than artful (“Yup…you guessed it”; “We had a blast together.”)

While the illustrations tell the story clearly, they are flat-looking and unexceptional. There are many two-page spreads with text only; more illustrations would have enhanced the book’s appeal. Additionally, the narrative includes some copyediting errors that should have been caught before publication, such as the use of “wonder” instead of “wander” and “bolder” instead of “boulder.”

These issues aside, Pebble is a generally well-told tale. It should draw in readers with its unique viewpoint of a young boy’s daily life.