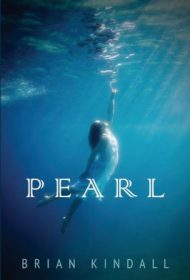 Although categorized as middle grade fantasy, Brian Kindall’s Pearl is an all-ages fable about an ancient statue of a girl carved from “the purest milk-white stone” whose life is irrevocably changed when a diver pulls her from the sea.

Pearl, as she comes to be called, exists in a world where reality and dreams are blurred. In an aquatic realm of murky shadow where little minnows are her only friends, she lives in limbo—neither particularly happy nor sad—waiting for something, or someone, to affect her “soul of stone.”

Her life is changed when a diver named Niko finds her and raises her into his boat. He places her in a hidden grotto on a secluded island, and for a time, her life with him seems idyllic. But then he sells her to traders, and she is transported far away and placed in a room with two other statues. She befriends these “solidified dreams of a sculptor” only to watch them destroyed when war overtakes the region.

Hidden underground with rats for an indeterminate period, she’s eventually found by grave robbers, who sell her to a collector. Wasting away in a dusty store, Pearl realizes that her soul is not made of stone and that she has hopes and dreams just like living, breathing humans —if only she could find a way for those dreams to come true.

Having a protagonist that’s an unmoving statue is challenging, and because of Pearl’s inertness, the narrative at times seems subdued and disconnected. But ultimately this is a story about internal growth—a fantastical journey of self-discovery, if you will—and Pearl’s slow transformation powers this story. The thematic weight of Pearl’s metamorphosis is also notable as the author explores many concepts in a clear and philosophical manner.

This is a more understated, muted novel compared to Kindall’s Blue Sky, but arguably more thematically powerful. The topics examined should provide rich fodder for conversations with young readers.