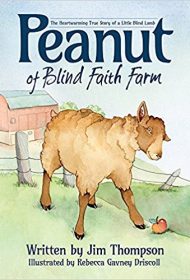 The inspiring true tale of a blind lamb is detailed in Peanut of Blind Faith Farm, a handsome picture book by hobby farmer Jim Thompson.

Jim and Laura Thompson notice that one of their newborn lambs is behaving strangely. As Thompson vividly and tenderly describes, “Little Peanut bobbed her head in every direction and turned her ears toward the smallest of noises. It was as if she were trying to understand her new world just by listening.” They call in a veterinarian who confirms that the lamb, named Peanut, is blind.

The vet casts doubt on the lamb’s ability to survive, but Jim and Laura help her learn everyday actions, such as lying down, finding her mother from a distance (with the help of a bell around Mom’s neck), locating her food and water, and playing with the other sheep.

Driscoll’s illustrations are beautiful, with the animals rendered in a style both realistic and appealing to children. It’s easy to tell which sheep is which, and that Peanut’s eyes are initially different from the others’. Driscoll uses soft colors and knows when to show detail and when to pull back for a wider view.

Thompson’s writing strikes a perfect chord, presenting Peanut’s problems and their solutions in a way that unfolds naturally. He doesn’t draw unnecessary attention to the underlying message of empowerment for the disabled, but allows the story to speak for itself. The Thompsons deliver compassion and assistance, but it’s also shown that in the end, Peanut must learn to be as self-sufficient as any of the other sheep. In doing so, she gains an independence and pride that shines through.

Peanut of Blind Faith Farm is an underdog (or undersheep!) story that, while somewhat familiar in broad strokes, is executed flawlessly, making it a definitive example of the form. It is recommended for any child, but most especially for those who face their own physical obstacles.