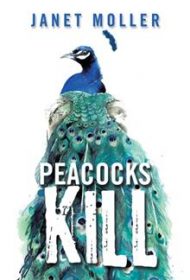 What begins with murder in the quaint English countryside becomes a thrilling treasure hunt across the sands of Africa in this charming and very British cozy whodunit set sometime after fax machines but before common cell phone use.

Matilda is a retired private investigator who specialized in finding valuable lost art. Her 26-year-old niece Ella, the novel’s engaging narrator, is an archaeologist who is vacationing with her. While puttering in her garden, Matilda hears a gunshot. Rushing into her cottage, she finds a dead man clutching one of her scarves. Rather than leave the investigating to the authorities, Matilda keeps the scarf, believing it is key to the murder.

The ladies’ subsequent private investigation leads them to a seedy art dealer whom they also find dead in his shop. It appears the scarf is a map of sorts to an old gold mine in Zimbabwe. So off they go to Africa, eventually unearthing one of the greatest finds in history—proof, that at least in one instance, that the Bible is literal truth. Throughout the story, the intrepid ladies overcome dangerous adversaries, squalid living conditions, and repeated attempts on their lives.

There’s much to enjoy here. The writing is confident and competent.  And while the author doesn’t employ literary flourishes, but rather, straightforward storytelling, she offers charmingly titled chapters and efficient, effective description, particularly regarding a long, hard ride in a camel caravan across the desert. There are a few typos, but they’re insignificant overall because the story is so compelling.

There is one flaw, however: The author virtually ignores the potential global effects of the find, which can’t be put down to just British understatement. Even the epilogue fails to mention the significance of their discovery. The story would be enhanced by addressing this issue.

Peacocks Kill is delightful in every other aspect, and despite this omission, mystery fans will enjoy this skillfully told tale.