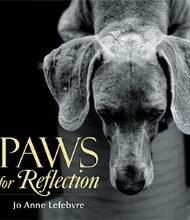 With her Paws for Refection, Jo Anne Lefebvre offers an essay and photograph book featuring her Weimaraner, Comanche. Lefebvre terms her essays “reflections,” and they cover topics ranging from balloons to seasons to compassion and death.

Most of the essays are just a paragraph long and are coupled with whimsical photographs of Comanche dressed in various costumes. Her “Reflections on Summer,” for example, is juxtaposed with a photo of her dog perched on a skateboard wearing a biker’s hat and sunglasses. Similarly, opposite her “Reflections on Recipes,” Comanche is pictured wearing a chef’s hat and clutching a spatula between his teeth.

Most of Lefebvre’s essays are upbeat and encouraging and are meant to foster a tolerant and compassionate attitude. The writing, like the pictures, reflects a blend of dog and human points of view. Comanche, for instance, suggests reading cookbooks or consulting the Internet for recipes and advises the use of “bone shaped cookie cutters.” This conjunction of dog and human works best when Lefebvre takes on topics such as prejudice and prejudgment. Dogs, Comanche points out, “don’t see colour, size or religion” and “don’t judge the outside!”

As foreshadowed by the title’s pun, the book’s content isn’t meant to be deeply philosophical but rather to embody a light and often humorous approach to the “simple things in life.” Unfortunately, the prose sometimes slips into tired platitudes such as “live in the moment” and “walk to the beat of our own drummer.” Lefebvre’s book also suffers from an abundance of run-on sentences and an incorrect use of capitals (“Chief of my Tribe”). In addition, readers acquainted with William Wegman’s photographic oeuvre on Weimaraners in costumes might miss at least a nod to his influence.

Nonetheless, dog lovers might find this an enjoyable coffee-table book to dip into now and then.