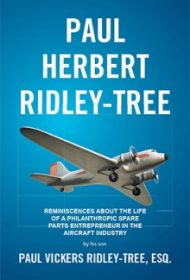 Author Paul Vickers Ridley-Tree melds a biography of his father with some score-settling in this slim book.

In 1943, Ridley-Tree took an entry-level job at Douglas Aircraft Company and was quickly promoted to spare parts manager, thanks to the wartime shortage of available workers. Learning which parts were most in demand, he went into business for himself, buying parts at scrap metal prices and reselling them with a generous markup.

Among the “reminiscences” the author includes is an enjoyable passage about the building of a house in Topanga, California, where the family lived for a few years. The author also shares fond memories of his father’s love of electrical gadgetry and the many toys he gave his son.

Often, the information seems more suited to family than general readers. Ridley-Tree’s biography describes his father’s lineage in excessive detail, which average readers will likely  find tedious. In addition, Ridley-Tree notes in a preface that part of his intent in writing is to “correct” things said about his father at the time of his death. He includes an extended discussion about whether his father should have received a knighthood or title through his English family, and later notes that his father left much of his fortune to a step-sibling and adopted sibling, while leaving him and his sister substantially less. He appears to be sorting out his feelings about this while writing, rather than making a clear point for readers.

Two other issues impede enjoyment: The book’s pages are printed on one side only, which is distracting. And Ridley-Tree awkwardly refers to his father only as “Father” (sometimes uncapitalized), creating verbal logjams: “Unfortunately, father’s jealous stepfather made father’s mother destroy the letters from Sir Herbert that acknowledged his fatherhood of my father.”

Unfortunately, most of Paul Herbert Ridley-Tree feels like a family affair that strangers are intruding upon. As such, it’s likely to have limited appeal.