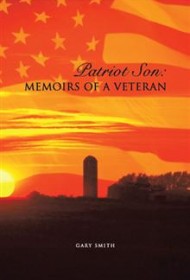 Gary Smith’s candid memoir of his Army career is a smooth, vivid and at times nailbiting read — a fascinating, personal look at military life that, given a few tweaks, has the potential to capture a wide audience.

Longing to fight in Vietnam, Smith enlisted in the Army but was never sent to ‘Nam. During a stint as an Army photographer at a medical facility in San Antonio, he saw horrendous war injuries and grueling rehabilitation. In 1972, he was sent to the Panama Canal Zone, where he and his wife were briefly ensnared in international intrigue and espionage.

When Saddam Hussein invaded Kuwait, he was sent to Iraq. His powerful Gulf War chapters include a journal entry his wife wrote upon his deployment and a school essay by his 11-year-old daughter about missing her dad. Rarely able to phone, he and his wife agonized over emotional letters that arrived weeks after various crises had passed. Throughout the book, Smith touches on the politics of war, how American sentiment changed from Vietnam to Desert Storm and his own evolving views.

As the book opens, Smith, who seems to be approaching 60 (though he never actually gives his age), has decided to retire from teaching special education due to persistent symptoms of Gulf War syndrome.

Smith’s writing is personal, descriptive, and introspective. Readers will relate to his dreams, his sense of humor, and foibles. He’s also adept at building tension so that readers are eager to learn what’s coming next.

Unfortunately, the final chapter addressing the Gulf War syndrome is disappointing; details of his symptoms and how they affected him would have created a profound ending to his gripping tale. Also, his tribute to a Vietnam veteran friend should be moved to an afterword, so as not to disrupt the narrative. These changes would give his book the satisfying ending his readers expect; without them, his promising book feels unfinished.