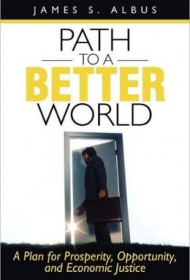 In Path to a Better World, the late James S. Albus, a well-known expert in the world of robotics and intelligent systems, presents a new economic system that adjusts for the negative effects of greater technology-based productivity. (The book was published in 2011, the same year Albus, then in his 70s, passed away.)

Albus’s primary contention is that, in light of increasing mechanization in the workplace, eventually there will not be enough demand for human workers in order to provide jobs for all those who need an income. His solution is a new form of capitalism in which individuals are granted credit by the government and required to invest that money in capital assets that can be expected to produce an income. He compares the program to 401(k)s, in that people would be given approved investment choices to pick from. This is not socialism under another name—there would still be the very rich at the top, but, as Albus puts it, “there would also be a rising floor at the bottom that would prevent anyone from sinking into poverty.”

Before detailing his preferred vision of the future, Albus explains the current version of capitalism, its defects, and the historical effects of technology on economies and workers. Albus references over 100 different sources, from government publications to his own academic papers, and the book is well-written, if a bit dry and repetitive at times.

As with most books that involve a radical rethinking of the status quo, it’s easy to come up with potential flaws: for example, Albus seems to believe that as long as poverty is eliminated, everything will go smoothly, but he admits that disparities between rich and poor may continue to grow, which seems like an alternate path to the very lord-and-serf system he wishes to avoid. Still, Albus presents bold, interesting, understandable ideas to what could be a significant problem in the 21st century economy.