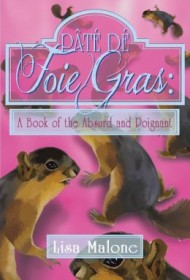 Readers might be tempted to quickly dismiss the fantastical reminiscences of author and poet Lisa Malone as she chronicles the crazy, creepy characters that inhabit her world – or maybe just her head. Certainly she opens her Pâté dé Foie Gras: Goose Liver, Pork Fat, Onions, Mushrooms & Trifles oddly enough with the story of a drug-induced nightmare of a badger attack, soon followed by her rebellion against a therapist’s suggestion that she is too troubled to be self-sufficient.

Yet such dismissal would do a disservice to a gifted writer — albeit one who sometimes gets in her own way.

Malone has populated her 1960s/70s era childhood and coming of age memories with over-the-top events and evil characters reminiscent of a Roald Dahl fantasy. While not for everyone, it is a mash-up that strangely works without trying too hard to sort out fact from fancy: from the French war bride who flings bricks through her family’s windows, to the Boy George wannabe who may or may not have impregnated the high school trollop, to the maniacal ex-nun who is her boss.

But then Malone’s book takes an abrupt U-turn as she switches gears and writes starkly of her brain surgeries to stop a tumor and of her deepening depression as she becomes disabled. “Do you know what it is like to outlive your usefulness long ago?” Suddenly there is a failed marriage never before mentioned and the heartbreak of giving up her pets. It’s as if a whole new writer has stepped in, complete with a new style, voice, and tone.

Malone tries to join the two parts with a tribute to how her father saved her both from the badger of her nightmare and the real life nightmare of an abusive marriage. Still, the disconnect is jarring.

Ultimately, this book’s structure is flawed. Even so, the author displays a raw talent that should not be overlooked.