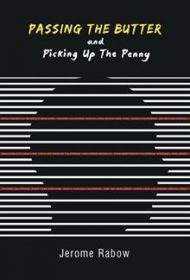 Social psychologist Jerome Rabow, born in 1933 to poor Jewish immigrant parents, grew up in Brighton Beach, Brooklyn, where he escaped the more overt effects of poverty: homelessness, hunger and cold. But, as he recounts in his revealing, well-written memoir, Passing The Butter and Picking Up The Penny, he always “felt” poor. His high school graduation gift to himself was a ten-cent Nathan’s hot dog, his first.

Along with extreme thrift, feelings of inferiority were woven into Rabow’s psyche, the legacy of his public school’s failure to promote him into the top division. Instead, he remained in the second tier of students, a designation he internalized. Still, his self-perceived inadequacies didn’t preclude his success as a professor of social psychology, first at UCLA, then at California State University-Northridge.

Less successful in relationships, Rabow was “shocked” when his marriage ended, despite his having cheated on his wife, and “dumbfounded” when his son accused him of failing to listen or acknowledge his feelings. Divorced, he began dating students 10 years his junior (after they completed his classes), dismissing them when he’d had enough: “Candy, after you pass me the butter and jam and finish your breakfast, I would like you to leave. I want to break up.” Eventually, he met Roz, a recent widow, who became his second wife.

Rabow is at his best when writing about his Brighton Beach childhood and the tension between the old and new worlds. He also writes compellingly about the Vietnam era. The author’s utter honesty draws readers in, even as it sometimes repels: At times, Rabow seems determined to portray himself in the least flattering light possible.

Overall, though, this is a compelling and worthy memoir. Rabow says he wrote the book for people who want to learn from their failures and deepen their understanding of themselves. These are precisely the readers most likely to benefit from this frank travelogue of the author’s long, painful journey from self-loathing to self-acceptance.