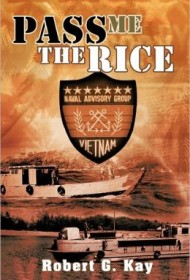 Tough, raw and brutally honest, Pass Me the Rice is about Robert G. Kay’s experiences as a naval adviser in the Vietcong-controlled waters of South Vietnam.

The Vietnam War was an unpopular conflict that triggered strong emotions. But Pass Me the Rice is not about the politics surrounding the war or the author’s political beliefs. They’re irrelevant to Kay’s motivation for writing his detail-rich memoir. In the prologue, the author states that he wanted to “present a different picture of the war in Vietnam through the eyes of a naval adviser.”

As such, Pass Me the Rice is not an action-packed war story Hollywood would jump on. A movie version would likely be sterilized, sanitized and devoid of the raw emotions – often off-putting and unsettlingly personal – exorcising the book’s soul.

Kay enlisted and turned down a year of choice sea duty as a first lieutenant on a destroyer testing an experimental sonar system. Instead, he put himself in harm’s way by volunteering for a dangerous assignment patrolling the polluted, infested waters and jungles of Southeast Asia.

His memoir is about war’s banalities and brutalities. Most important, it’s about the warriors who fight them. There are no John Wayne-type heroes leading troops to victory here. Instead, there are simply men working and living under inhuman conditions trying to survive. It’s not an every-man-for-himself saga, but about camaraderie, men watching each other’s backs so that they can return to their loved ones.

In the book’s prologue, Kay notes that if the book hadn’t been published, he still would have written a journal of his Vietnam experiences to answer his children’s question, “What did you do during the war, Dad?”