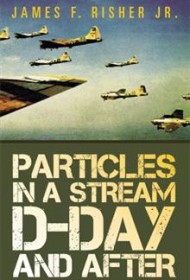 About halfway through James F. Risher’s Particles in a Stream: D-Day and After, a present-tense sequence describing a B-17 bombing mission over Germany appears. From waking up at 2:30 in the morning to arriving safely, though flak-punctured, back in England half a day later, the passage can stand with the best writing on aerial combat in World War II.

Immediately after that, reverting to the book’s overall past-tense narrative, the story features another excellent section, this one showing readers how officers and airmen spent their down time and dealt with the deaths of friends and the ever-near possibility of their own deaths. Another noteworthy section draws a composite picture of the “average GI pilot” and his attachment to his plane and admiration for its individual “personality.”

If the entire book were like these examples, it would be a remarkable chronicle (despite its typographical errors and other copyediting issues). The balance of the book, however, reads rather like the personal account that it originally was, some of it written during Risher’s retirement, the rest between 1948-1950, when he was an Air Force major stationed in Germany.

Most of the story covers the time span between April-August 1944, when Risher was a 27-year-old Army Air Force pilot in the 614th Squadron, 401st Bombardment Group, Eighth Air Force, stationed at Deenthorpe, England. He completed 32 missions and went on to remain in the military for 35 years, dying in 1986. His sons prepared the manuscript for publication.

Risher’s account is factual and philosophical at the same time, and not unpleasantly monotonal. The prosaicness of most war remembrances usually dooms them to a limited readership of their authors’ families, friends and former comrades. Risher, however, was such a thoughtful, inquisitive person, able to render his observations in lucid writing, that his book can be recommended to anyone wanting a close look at how Americans fought World War II.