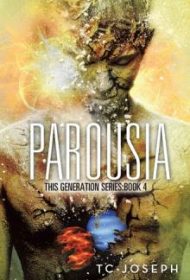 A science fiction-powered, epic reimagining of the Bible’s Book of Revelation, the fourth installment in the pseudonymous Joseph’s This Generation saga (after 2016’s Penance) culminates in a jaw-dropping conclusion that is simultaneously apocalyptic fiction and visionary utopian fiction.

The novel is set in the End Times—a period of tribulation that heralds the second Coming of Christ. Isa Kurtoglu is the self-proclaimed savior of humankind, the one who will unify the population and prepare them physically and spiritually to win the looming battle with the alien Anu, who (according to the government) will be arriving shortly to destroy the planet.

Kurtoglu is, however, the Antichrist—and he is systematically turning humans away from Christ and into eternal darkness. Kurtoglu has commanded the population to kill Christians on sight, and the events foretold in the Book of Revelation—locusts, hail and fire, a great star poisoning the water, etc.—radically transmute the planet into a nightmarish hellscape as a small group of Christians who have survived the culling struggle to stay alive to see Christ’s glorious return.

The highly appealing blend of Christian eschatology and apocalyptic thriller notwithstanding, the power of this series comes in Joseph’s adept character development. Identifiable and endearing characters like Will Marron, who heroically attempted to assassinate Kurtoglu only to have the evil creature resurrect itself into a virtually unstoppable enemy, and Gloria Jolean, the disgraced wife of a morally bankrupt televangelist whose harrowing spiritual journey of self-discovery will touch all readers, give the grand-scale story an intimacy and emotional intensity. The breakneck pacing and nonstop action—coupled with Joseph’s fluid and clear writing style—make for an undeniably page-turning read.

This is Christian science fiction at its very best—entertaining and edifying. Comparable to the Left Behind series by Tim LaHaye and Jerry B. Jenkins, this saga is, in a word, transformative.