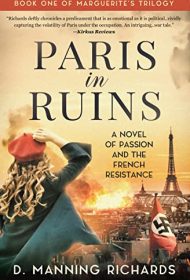 This complex, engaging novel sees the population of occupied Paris in 1943 divided into three factions: Nazi collaborators, resistors to everything German, and those, somewhere in between, who manage to go about their daily lives.

Protagonist Marguerite exists mainly in the last, breathing the rarified air of quantum physics on her way toward a graduate degree. She lives immodestly with Erich, a married German colonel, thus earning her the rank of “horizontal collaborator” from the Resistance.

Her relatively placid life is disrupted by the sudden reappearance of Jean-Baptiste, a former lover and Underground agent to whom she discovers she’s still attracted. After deciding it wouldn’t betray Erich as the source of the information and with hopes that it might hasten war’s end, she tells Jean-Baptiste what she has learned about Nazi secret weapons. By novel’s end, she has become a full-fledged Allied spy.

In some ways, Erich is the story’s most interesting character. He’s from an aristocratic military family, comfortable with men, awkward with women, and somewhat of a sexual prude. The passionate Marguerite gradually eases the latter and draws ever closer to the colonel, whose anti-Nazi sentiments have drawn the unwelcome attention of a particularly sinister Gestapo agent.

Moving toward liberation, the narrative becomes more violent, the characters more desperate. Jean-Baptiste is tortured; Erich’s life is endangered; Marguerite dodges peril after peril. All intersect by the end of this dramatic and well-drawn narrative in a scene of crisis where each takes a stand, revealing his/ her true character.

Unfortunately, after a realistic account of loss, vicious conflict and chaos, the novel ends with irresolution as Marguerite, choosing between lovers, comes to a decision that hardly seems definitive. That’s likely because this is the first volume of a trilogy.

The ending will disappoint many, but the story’s twists and how the characters deal with them are told with a flair for human foibles that will keep readers involved almost to the end.