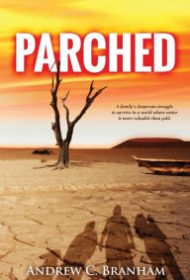 Author Andrew Branham chronicled his daughter’s adoption in his first book, Anything for Amelia (2015), and family is again at the heart of his novel, Parched.

Futurists call such stories a “slow apocalypse”:  when the world ends not with a bang but a whimper. The narrative opens on a family in Livermore, California, headed by James, a former youth minister, and his wife Lexie, as they struggle to protect their son and newborn daughter from a world gone dry.

In Branham’s eerie scenario, our sun has become a red giant: The earth is scorched, government has collapsed, and water is the world’s currency.  When bandits attack the family’s home, they’re forced to flee. They attempt to connect with Lexie’s sister, a high-ranking official with FEMA, only to find that her facility has been overrun. Afflicted by dehydration, illness and predatory survivors, the family takes to the road trying to reach a rumored oasis in Ohio.

Here, the novel becomes a combination of survival epic and familial drama, with James and Lexie struggling with their own morality.  “How far would he go to survive?” the narrator posits of James. “Would he riot? Would he steal? Threaten someone’s life, perhaps even at gunpoint?”

The novel presents a deeply intriguing scenario, and Branham’s writing serves it well. However, the characters and narrative arc suffer from a few flaws. James is very naïve given the situation’s gravity and Lexie somewhat of a cipher until the novel’s end, when Branham forces her to take center stage. Additionally, the reversal causing Lexie to step up is likely to jar readers, as it completely changes the story’s direction at the last second.

That said, Parched is likely to appeal to fans of AMC’s The Walking Dead, as it creates a similar scenario where no one is safe. Readers who reach the book’s cliffhanger ending are likely to want more; Branham promises two sequels that carry the family’s quest to fruition.