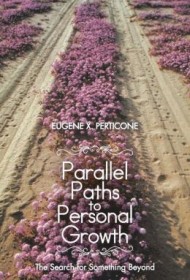 In order to expand consciousness and experience personal growth, he advises, one must pursue both the path of the personal, rational intellect and its parallel path of non-personal, intuitive spirituality. Only by achieving a “correspondence” between Doing (ego) and Being (non-ego) can truths become recognized.

The author tries his best to lead readers to a kind of enlightenment via different schools of humanistic transpersonal psychology and a smattering of personal anecdotes, but he doesn’t display or share much that is universal enough for his audience to recognize or identify with. In addition, the writing is repetitive — stating the same ideas in different ways — and key information is all too often lost in the reiteration of suppositions that are neither fully explained nor proved. While there may well be Something Greater Than Us, and spiritual beliefs may aid in its discovery, Perticone offers no examples, no specifics, to serve as illustration.

There is one wonderful feature, however, which redeems the book: Chapter 13, “Considering What You Know,” offers 61 probing questions and guided journal entry prompts for personal exploration, reflection and expression on the path to self-knowledge. It presents the work’s message in an accessible, interactive and useful application, which is too often missing in this otherwise difficult treatise.