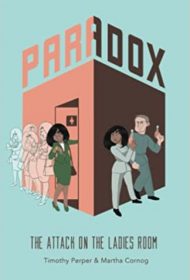 Paradox: The Attack on the Ladies Room, by the late Timothy Perper and his widow, Martha Cornog, is a lighthearted, enjoyable science fiction mystery.

The novel posits a world where government bureaucrats police parallel universes (“paraverses”), engage in limited time travel, and combat clandestine fascist groups, all under the watchful-if-somewhat-aloof eye of a mysterious power known only as “The Instrumentality.”

In this world, someone important has gone missing: Krylla, an operative for DivEs (the Division of Esoterica), which deals in paraverse matters. One moment, en route to a meeting, she entered the ladies room; the next she was sucked through a proverbial rabbit hole into a realm populated by all her other selves (a.k.a. “homologues”) from across the multiverse.

Krylla’s husband and fellow DivEs operative, Smith, discovers her absence after being charged by The Instrumentality with his own needle-in-a-haystack mission: Somewhere across the infinite paraverses he must locate an obscure poet named Yvor Grache. Why? That’s not for him to know. Now, as the Kryllas join forces to return to their own worlds, Smith uncovers a provocative connection between her disappearance and Grache.

But why was Krylla even taken in the first place? And who does this all serve?

Paradox is even more complicated than it sounds, with paraverse-hopping implications and time travel mechanics that boggle the mind, as well as some lengthy academic explanations that would be altogether dull if not so skillfully injected with cheeky humor.

The plot is hard to follow at times, and it lags a bit in the middle before picking up steam again, but the characters are relentlessly likable, and the dry wit and focus on academics and bureaucrats channels a tradition of greats like Douglas Adams and Terry Pratchett.

Readers are well-advised to set aside early confusion with Paradox (it’s called that for a reason, after all), and simply enjoy the wild ride, knowing that everything (more or less) works out, culminating in a satisfying and entertaining conclusion.