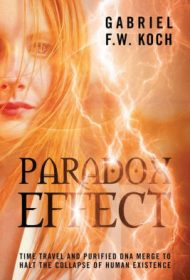 Author Gabriel F.W. Koch folds a love story, a savior arc and a noodle-bending time travel story into this compelling and unusual novel.

The story opens in Manhattan circa 1954, as Naval intelligence officer Peter Hersh meets beautiful contract engineer Dannia Weston, a woman suffering from headaches and hallucinations. The narrative then rockets forward to 2254, where General Patrick Buckwalder struggles to hold together the “Return Egress Project,” an experiment using time travel to try to correct damage inflicted during the “Chaos Wars,” a series of cataclysmic conflicts in an unspecified timeframe that obliterated civilization as we know it.

Gradually, it’s revealed that Dannia was Agent 476 in the time travel experiment, sent back in time to retroactively improve the atmosphere of the future. However, her romantic liaison with now-husband Peter results in a pregnancy that alters the genetic modifications that enabled her time travel and kept her future memories intact. The result is a woman exiled from her own time, protecting a child with DNA from both the past and the future who cannot safely exist in either era. In fact, the child’s very existence creates a temporal anomaly that begins to wreak havoc on the world of 2254 and puts both mother and child in grave danger.

It’s a bit of a tightrope to walk between the dizzying post-apocalyptic world of the future and the noir-ish setting of the past (Koch’s fictional private eye Marlowe Black and real-life crime writer Mickey Spillane make cameos). This is an ambitious work of speculative fiction that doesn’t deign to hold the reader’s hand. That said, although the gyrations between past and future can seem jarring at first, persistence proves rewarding. The book’s believable love story between Dannia and Peter, strong supporting characters, tight pacing and visceral threats are equally satisfying.

For readers who enjoy movies like The Terminator or Minority Report mixed with a dash of private-eye intrigue, this will be a welcome anomaly indeed.