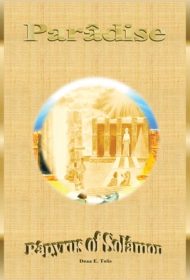 In Paradise Papyrus of Solamon, author Doaa E. Tolis presents a tour through history focused on a “Land of Paradise” that turns out to be Egypt. Using the Quran, the Bible, and other sources, ancient and modern, she rewrites the last 6,000 years of history.

Tolis’s narrative uses the framework of an actual tour, complete with tour guide. Focusing on events in the Mediterranean world, she presents an alternate world history centering on biblical, ancient history and mythological figures, including Noah, Hesiod, Solon, Moses, and, the hero of the story, Solomon (spelled “Solamon” throughout). King Solomon, per Tolis, presided over a golden age of wisdom, morality and science that remains unsurpassed.

Tolis’s timeline contradicts the chronology proffered by both religious traditions and historical/archaeological scholarship. For example, she places Kings David and Solomon, generally dated to the early first millennium BCE, about 500 years later than that. She also states, contrary to biblical narrative, that Moses did not lead his people out of Egypt, but rather into it, crossing not the Red Sea but the Mediterranean from north to south.

For Tolis, the ancient historical texts are allegorical. For example, the Book of Job is not only about an individual and his misfortunes but about an age of disease that befell the entire world. She eventually brings the allegory to present day, discussing modern environmental woes and their causes.

Tolis writes in an oracular style that seems imitative of ancient writing and is sometimes hard to follow. She notes that English isn’t her first language, and many errors in spelling, grammar and syntax make the text unclear. Also, she provides appendices with references and clarifications but never responds to the scholarly consensus that contradicts her alternate views of history.

The mood of Tolis’s work is positive and her tour framework is charming. But the prose is frequently opaque and her reading of history questionable. The result is a narrative best read as a Tolkienesque fable that draws on history for its material.