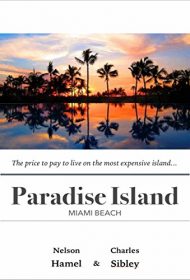 Paradise Island Miami Beach is a thriller told in brief chapters highlighting many of the luxury island residents’ histories and exploits, ultimately offering a glimpse into the fictional world of the rich and powerful.

The book begins as three teenage boys, their only life experiences being wealth, privilege and growing up surrounded by other extremely rich families, drug and gang rape a teenage girl whom they have known for practically their entire lives. As the story unfolds, her surgeon father, after hiring a private company to investigate the perpetrators, devises a creatively gruesome revenge.

This is one of several tales told in this book, a collection of almost separate stories that wrap into one, encompassing plot detailing the exploits of various island residents. Top doctors and architects, cheating wives, violent husbands, oil barons, celebrities, a former U.S. president and a couple of Cuban street entertainers are only a sample of the characters who populate the mansions of Paradise Island. Fortune, family, scandal, intrigue, kinky sex, revenge and espionage are at the center of their complicated existence.

Surprisingly, despite the large number of characters, diverging plotlines and even multiple family histories to digest, the book is easy to follow. Chapters are clearly labeled with the characters featured, and even though the plot skips from story to story, the overall narrative arc still makes sense.

The short stories are crisply written and addictively easy to read, with a few notable flaws: The book’s revenge scenario requires some suspension of disbelief, and the dialogue is stiff and stilted, primarily because the author doesn’t use contractions (“What happened to me, Johnny? Everything hurts! I think I am bleeding”). It’s distracting enough to pull readers away from the otherwise engrossing plots.

Overall, though, Paradise Island is an entertaining book for those seeking a fast-paced, uniquely presented thrill ride.