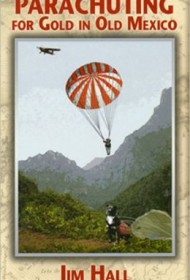 In the mid 1950s, World War II veteran Jim Hall abandoned a series of dangerous dead-end jobs and followed accounts of gold deposits to the high Sierras of central Mexico. Although he never became fabulously wealthy from his subsequent adventures, the search was, according to this engaging memoir, filled with weird and wonderful encounters.

Most involved parachuting, since at that time helicopters were neither advanced or available enough to provide access into the rugged terrain where the supposed gold lay hidden. After receiving the first parachutist’s license issued in Mexico, Hall branched out from prospecting, jumping into rivers and harbors, onto beaches and mountainsides in weather conditions ranging from calm to near-hurricane. Between jumps, he was nearly killed by would-be thieves, rescued a dog from a pack of tormenting children, fell in love, and met Fidel Castro who recruited him for the Cuban Revolution (he was persuaded otherwise by the American Embassy).

But mainly he leapt out of airplanes. Because at the time civilian parachutists were a rarity, spectators were eager to watch him display his skills. He floated down to an Acapulco beach to present a cup to a beauty contest winner. He dressed as Rudolph the Red-Nosed Reindeer and jumped into a children’s Christmas party. He even jumped once in the nude.

Filled with such daring-do, Hall’s memoir – though occasionally marred by overly negative judgments of others and needlessly macho remarks about the physical attributes of women he met along the way – remains a solid tale of a man who relentlessly carved his own course through life. While vast riches remained elusive to him, never closer than tomorrow’s rumor, he is not disappointed, since for the true adventurer, the adventure itself is at least as important as the goal. Here, he lets readers share his excitement.