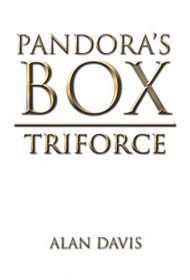 Pandora’s Box: Triforce is a spiritual fantasy focusing on the magical exploits and morally righteous, interventionist activities of protagonists Sunita and Darth.

Mystical maverick Darth, aka Sirius Black, is on a quest to retrieve a magical MacGuffin called the Infinity Stone. His quest, fraught with peril, leads him to a realm troubled by iniquity. He provides support to the local populace, who are struggling to subsist under increasingly burdensome circumstances. As a result, he’s imprisoned by a corrupt prince, forced to work as an indentured labourer.

Meanwhile, Sunita, Lady of Berkana, has been dispatched to the realm by The Sage Order that she represents, to oversee a sacred ritual in the company of the monarchy—a ritual that will help rid the kingdom of a supernatural plague devastating its populace. To expose the corruption festering at the realm’s core, Darth will require Sunita’s support.

Generally, this is an enlightening work that satisfactorily blends elements of history and Eastern spiritualism with the romantic adventuring of Western fantasy. The central narrative, focusing on the meddlesome antics of Darth and Sunita, is packed with socio-political intrigue and action. The novel’s spiritual and earthly realms are impressively realized, brimming with creative detail and esoteric wonder.

Diverse characters populate the story, including beguiling Darth, villainous Prince Edward, licentious princess Ursula, and morally upstanding Berkana assistant, Katanya. Sunita is the character most likely to appeal to readers, however, as her self-actualization journey is the most relatable.

The main narrative is sprinkled with life lessons on sexual politics, worker’s rights, religious fundamentalism and COVID-19. While readers keen on developing their spiritual awareness and fantasy fans looking for an alternative genre experience will see rewards in this approach, casual readers might find these interludes distracting.

Some readers will feel alienated by the author’s writing for this reason. Overall, though, this is an immersive, illuminating read, overflowing with ideas and imaginative feats that should appeal to a broad range of genre fans.