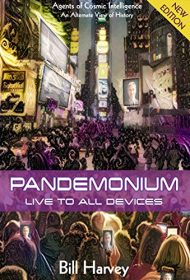 Pandemonium is the second book Bill Harvey has written for his Agents of Cosmic Intelligence saga. Planned to come 13th in the finished series, it’s a science fiction spy thriller with deep metaphysical undertones where the future of humankind is at stake.

Set in the near future, Earth is on the verge of a third world war after a “psychic monster” in the form of a charismatic terrorist takes over Iran, planning eventually to rule the world. Complicating matters is an unhinged United States president who seizes control of the country and pushes the world to the brink of nuclear Armageddon with an insane agenda.

As tensions escalate, two psychic soldiers — Ed Templegard, an operative in America’s top secret psychic paramilitary group Theta Force, and Nastassia Slayevsky, Russia’s most powerful psychic, only 17 years old — join forces in an attempt to save the world from an ancient enemy that has been lurking in the shadows for millennia.

Fueled by brilliantly insightful scientific speculation — such as augmented reality advertisements known as “hallucinads” and cutting-edge marketing devices known as “Gibsons” that blur the lines between reality and virtual reality—the meticulously described science fiction backdrop is an undeniable strength. The power of this story, however — the rich fusion of concepts, prophetic world-building and intricate plotlines — is also a weakness: Readers could become overwhelmed by the complexity of Harvey’s “intertwined nitroglycerine puzzle” of invading aliens, Nazi conspiracies, robotic doppelgängers, psychic soldiers, doomsday devices, Lucifer and a philosophy revolving around the One Consciousness, the early psychics’ concept of God.

Some readers might experience this as a convoluted, everything-but-the-kitchen-sink novel while others might enjoy the labyrinthine plotting and visionary science fiction conceptualizations.

This thick narrative full of big ideas is recommended for deep readers who enjoy their literary fare on the mind-bending and thought-provoking side.

Author Platform: Media research industry leader and inventor Bill Harvey has foretold the future of media for over 35 years. In April 2022, he received an Emmy Award for pioneering technology development.