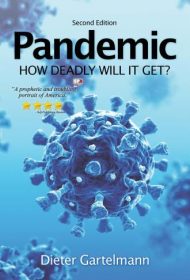 In this story, an indigenous man from South Andaman Island monitors the U.S. as its citizens and politicians react to the COVID-19 pandemic.

Scientist Argus E is a “defacto” health advisor for the South Andaman Island and surrounding islands. As the pandemic worsens, elders in his homeland worry about conditions in the U.S. and ask Argus to monitor the situation. To keep it manageable, Argus elects to follow the work of two reporters — one left- and one right-leaning — along with the correspondence of several friends.

Dorothy Thompson is a left-leaning Washington Post columnist who writes under the name Rebecca Sanders when the topic might threaten her safety. As the story evolves, Thompson corresponds routinely with President Biden, who must deal with the riots and Jan. 6th attack on the Capitol, in addition to the pandemic. Thompson’s counterpart on the right is Darryl Braithwaite who writes for the St. Joseph News-Press and “saw Trump as a modern-day Jesse James…”

Both reporters seem reasoned in their beliefs. Not so, other characters, such as ring-wing Ohioan Blew Ohrtman, who “had an overwhelming desire to shoot someone, a black man, of course …” finding out “years after his marriage that his wife Petal had black roots.”

Eventually, the virus morphs into a new strain that means certain death to those infected. Meanwhile, the ever-worsening political climate is exacerbated by confrontations over the Second-Amendment, civil liberties, women’s rights and other hot topics.

This is a detailed look at current U.S. political events with a fictional spin that tends toward the left. Well written and researched, it’s interesting and entertaining, but also a frightening scenario of how politics can divide a nation and lead even sane people to radical ideas.

The story has a large cast of characters that can sometimes seem unwieldy. Additionally, the odd use of British English from American characters, such as arse or whilst, will likely be jarring to U.S. readers.

Despite such flaws, it should appeal to those interested in current events and politics.