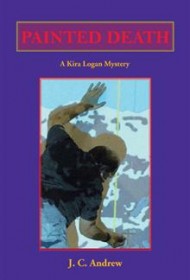 Murals and murder are the starting point for J.C. Andrew’s novel, subtitled A Kira Logan Mystery.

Thanks to her old art school friend Jackie Denton, Kira, an Arizona artist, is commissioned by the Raven Creek, Alaska, Mural Society to create a design commemorating lost-at-sea ships and crews from the Alaskan coastal town. The potential for controversy arises when one of the recently missing fishing boats is suspected of criminal activities after its skipper is found dead. It’s the first of several apparent murders, which causes a rift between those who think the boat should or should not be included in the mural.

Through Jackie, Kira is introduced to many townspeople, since murals are part of an annual festival that helps mark the end of tourist season. Although Kira created the mural’s design, Raven Creek volunteers paint it during an event that doubles as a social gathering. Here, Kira quickly identifies a prospective love interest and befriends the daughter of the dead fishing boat captain.

Andrew divides the story into the seven days leading to the mural’s completion. Unfortunately, the story progresses too rapidly. A good mystery should provide plenty of possible culprits, making it difficult to determine whodunit before the end. Painted Death has an abundance of suspects, but they are introduced and discarded far too quickly, before their characters are fully developed.

Additionally, while Kira and Jackie believe that the appearance of the first dead body and two other murders are connected, the women express their concerns to one another but don’t do much sleuthing on their own. Had they, this would have provided a heightened element of suspense.

Overall, this work lacks the true intrigue of a mystery. Nonetheless, Andrew masterfully describes the Alaskan landscape (“Across an expanse of gravel, the sun reflected off the white mass of Parten Glacier”), and when read as general fiction, the novel provides a charming story of friendship and an artist’s work in an Alaskan tourist community.