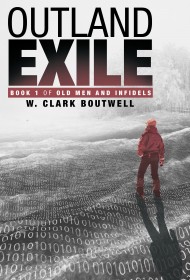 A powerful blend of post-apocalyptic fiction, science fiction and brass-knuckle social commentary, W. Clark Boutwell’s Outland Exile, the first installment of a projected series, is a towering tour de force of a novel. It’s a cautionary tale for today’s superficial, youth-obsessed culture that chronicles a young woman’s heroic journey of self-discovery as she realizes that everything she believes to be real is government propaganda designed to sedate and manipulate the sheep-like populace.

Set in the year 2128 – almost a century after the Third Iraqi War culminated with nuclear strikes destroying all U.S. forces in the region and upsetting the world economy – the storyline revolves around Malila Chiu, a 17-year-old living in Nyork, a city in the Democratic Unity of America. The Unity, established after a brutal civil war ripped through America following the Iraqi war, is a shining example of an advanced society. All citizens have access to legalized recreational drugs and biosensory implants that automatically adjust hormone and medication levels.

Chiu believes her way of life, where children are raised in communal care facilities and everyone is forced to retire at age 40, is idyllic. But when she’s sent on a mission to check a faulty Unity sensor station in the Outlands (once known as Wisconsin), her world is turned upside down. She is kidnapped by Outlanders — savages who live in the wasteland of “some extinct republic.” Her captor, a wily old man named Jesse Johnstone, is taking her to a place he calls Kentucky, and during the long, arduous journey, Chiu learns invaluable information about America, humankind and herself.

The novel is powered by a cast of authentic and relatable characters. Relentlessly visionary, thematically profound and impeccably edited, it is one of those rare stories that both entertains and enlightens, providing a nightmarish glimpse into America’s post-apocalyptic future that will stay with readers long after the last page is turned. In short, Outland Exile is a must-read for anyone who loves speculative fiction.