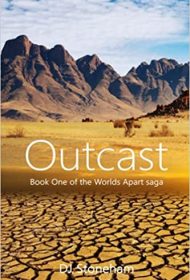 Reminiscent of Swift’s Gulliver’s Travels in terms of unbridled creativity, the first installment of DJ Stoneham’s shelf-bending Worlds Apart duology is simultaneously an epic travelogue through fantastical worlds and the ramblings of a clinically insane madman.

Luke Boyle is a disillusioned copy writer working at a small advertising company in England. Unsatisfied with his dead-end job and acrimoniously divorced, Boyle’s pipe dream of becoming a successful genre fiction novelist is reignited when he fatefully runs across Simon Coe while visiting his dementia-plagued mother in a mental institution. Secured to his bed with restraints, Sye—as he calls himself—rambles nonstop about his life in a (seemingly) imaginary world inhabited by all kinds of fantastical beings and creatures.

As Boyle listens to the madman babbling, he realizes that he can essentially steal his delusions for his novel. So, the two men make a deal: Sye will share his incredible story with Boyle, but only if the copy writer promises to listen until the very end. Thus begins an incredible story of one man’s search for himself. Beginning as an outcast living in a monolithic castle in a desert wasteland called Westwinds, where he was the only person without horns and a tail, Sye chronicles his improbable rise to power and heartrending fall from grace, which led to his exile. Barely escaping the endless desert, Sye begins an epic quest to find his people, and himself.

There’s much to love here: The narrative’s structure is brilliant, and the Gulliver-like journey of Sye’s fantastical wanderings keeps readers turning pages. Additionally, the author explores fascinating themes, such as whether humans are inherently corrupt.

However, the many sequences, especially in the latter chapters, stretch on unnecessarily, negatively impacting momentum and readability. Also, the ending is frustrating and unsatisfying—not an ending but rather a sudden, jarring stopping point until Book Two.

Those flaws aside, readers will find this a potent work of fantasy storytelling.