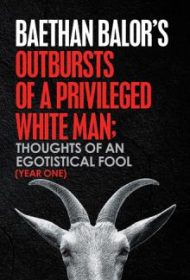 Baethan Balor’s Outbursts of a Privileged White Man is a memoir in diary form, comprising the writer’s semi-daily observations and musings over the course of one year. Within it, he chronicles dysfunctional family dynamics, lingering heartbreak, an ambivalence toward physical relationships, degrading mental health, a fixation with philosophy, and the plodding labor of writing (or failing to write) a novel.

On one hand, Balor is a gifted writer whose prose is cutting, provocative, and honest. There’s an emotional honesty in Balor’s choice to present his journal apparently unaltered and unabridged. As he puts it: “I refuse to believe the first draft of anything is shit; I believe the first draft is akin to the newborn child coated in the vaginal bacteria of a mother: pristine, bawling, disgusting: a miracle.”

The title may mislead prospective readers into thinking the book is polemic, political, or an exploration of identity. It’s actually none of these things. Instead, it recounts the quotidian and mundane, often in boring detail. Yet  because it provides a window into a troubled mind (Balor obliquely describes a battle with depression and unnamed trauma, all while contending with the possible horror of emerging schizophrenia), Outbursts can be unexpectedly compelling.

Memoir is an act of audacity, and readers may rightly ask why Balor’s experience should demand their attention. As an artifact of the author’s frequently disturbed thinking, charged with a conflicted misogyny and pervasive paranoia, and redolent of self-loathing and potentially violent sexuality, perhaps it won’t. But for a handful of readers, hooked by the glimpses of Balor’s literary ability and his first-person depiction of developing psychosis, Outbursts of a Privileged White Man provides a fascinating read.